There's no end to the imagination of the Leatherhead Lions, and the Lions float is now brought into action at Easter time as well. 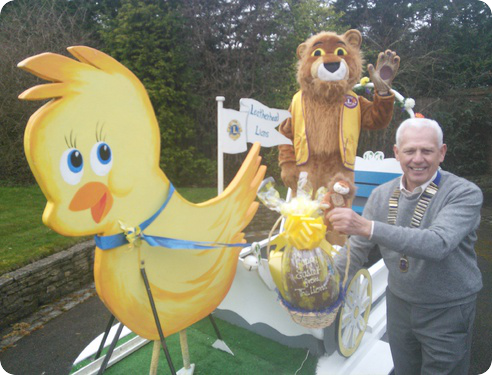 In conjunction with other Lions Clubs in the South-East of England, Leatherhead Lions raffles large Easter Eggs to raise money for the Kent, Surrey and Sussex Air Ambulance and other charities.

You may see us around and about in the lead-up to Easter in our famous ChickMobile! Here we are, with Roary taking centre stage on the float, and the main Easter Egg prize and a cuddly lion just waiting to be won. The prize is won by the person who correctly names the lion.

In 2015 were were in Dorking High Street, Epsom Market and Leatherhead High Street where we met so many generous people who took a moment to break off from their shopping to say hello and take part in the raffle. We'd also like to thank the Royal Oak and The Anchor in Bookham, as well as Ashtead Village Club, all of whom took one of our Easter Eggs for raffle. 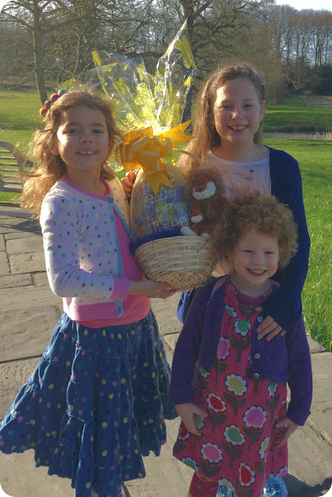 The egg was won by an 8 year old girl named Harriet, who correctly named the lion "Paul". We were later delighted to hear that Harriet had decided to pass the egg on to other deserving children. Here she is with her sisters Olivia (10) and Amelia (3) ready to take the egg to Henfold Lakes to share it with a group of children supported by The Studio ADHD Centre, a local charity that helps young people in Surrey with ADHD.

We shall be around again next Easter, so look out for Lions bearing large Easter eggs!